Ian Nicholson passed away on March 24th 2020. He left behind his wife Ingrid and daughters and all of their grandchildren that lovingly called Ian their Gaga. On March 24th, Ian took his final journey to the golf course in the sky. Infinite rounds, a birdie every hole, no sandpits, easy hole in one and complimentary membership fees.

He left behind his loving wife Ingrid to finish her rounds and enjoy her daughters and all of their grandchildren that lovingly called Ian their Gaga.

There are two sisters Ishbel and Elizabeth whom Ian was truly devoted to and both of them gave him nieces and nephews that were dear to him.

He loved to travel with Ingrid all over the world but had a special connection to the Bahamas where they would snowbird every winter.

So we bid you Cheerio dear Ian. Enjoy the golf and the all you can eat Cornflakes Buffet.

A celebration of life will be held at a later date.

Condolences and tributes may be directed to the family by visiting www.nunes-pottinger.com 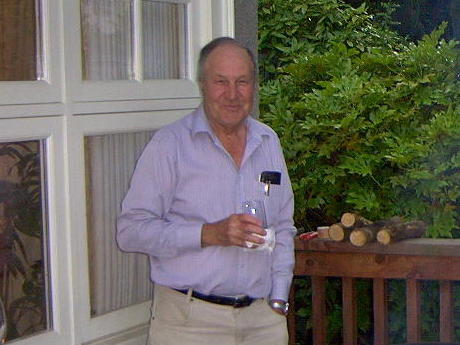 "Ian became a friend over the years we have lived in Canada, through many annual pot-luck gatherings held in the Vancouver Area. Ian lived in Osoyoos which is about 5 hours drive from Vancouver but went to the Bahamas over winter. Osoyoos is a quiet village surrounded by wineries. He and Ingrid would drive over the mountains to Vancouver for our gatherings and in the earlier years, they would sleep in their VW camper van. Before I knew him, he had retired from working in Alberta and told me they moved to Osoyoos as it was the first place one could play golf after the winter. I was fortunate to do a lot of travelling through Osoyoos for work and managed to drop by for a cup of tea a few times. We always had interesting conversations. Ian would send out a Christmas Letter each year usually containing humorous comments about current politics. He titled the letter I received on December 24, 2019: The Last Dreaded Christmas Letter."