Professor Lionel Opie passed away in Cape Town, on February 20 - he was 86 years old. Lionel was at the forefront of global cardiovascular research and development. Professor Lionel Opie was born in Hanover, South Africa, on May 6, 1933, and died in Cape Town, on February 20. He was 86 years old. The OD Union was unfortunately only made aware of his passing in November.

“He was the first real academic superstar to come out of Cape Town in the health sciences who stayed in Africa and chose not to go abroad…He showed that you could achieve excellence and global recognition by answering important questions while still working in Africa.”

Ntobeko Ntusi, Professor of Medicine at UCT and Principal Investigator with the Hatter Institute for Cardiovascular Research in Africa.

Lionel was considered one of, if not the best, cardiologist and heart researchers the continent has ever produced. His list of accolades is long; we have compiled the list below (see image). From receiving the prestigious Order of Mapungubwe (description here): Silver, for his “excellent contribution to the knowledge of and achievement in the field of cardiology” in 2006 to his honorary doctorate from the University of Copenhagen, Lionel stands amongst the most revered within his field. *This list was compiled from many different interviews and obituaries. Should you know of any achievements we have left out please get in contact at [email protected]

He then left Oxford for Harvard Medical School to work on heart metabolism in the Metabolic Research Unit at the Brigham Hospital. He returned to UCT in 1961 to complete his Doctor of Medicine degree in heart metabolism. Many years later he later gained a further degree from UCT, a Doctor of Science in Medicine (DSc) in 1994.

During the 1960s he worked at various hospitals, including; London's Hammersmith Hospital, Peter Bent Brigham Hospital in Boston, Toronto General Hospital and the Radcliffe Infirmary in Oxford. Lionel became a consultant with a post at the then Royal Postgraduate Medical School (Hammersmith) in 1969.

Prof Lionel Opie received numerous prestigious awards over the course of a long career including the Silver Medal from the International Society of Heart Research; the Wellcome Gold Medal for Research of Specific Importance to South Africa; and Honorary Doctorate (DSc) degrees from the Universities of Stellenbosch (acceptance speech) and Copenhagen. He was a Fellow of the Royal Society of South Africa, the Royal College of Physicians (London), the American Heart Association, and a Life Fellow of UCT.

Political change was rife in South Africa during the early 1990s,  as a result, Lionel and his good friend and colleague, Derek Yellon set about cementing links between the University of Cape Town and University College of London with the establishment of a second Hatter Institute for Cardiology at the UCT Medical School, initially with Lionel as its Director. Until now, 22 years later the annual Cardiology, Diabetes, & Nephrology at the Limits meetings are still going today with this year’s event celebrating the rich life lived by Lionel.

Lionel was an exceptional intellect and true gentleman, with his career and friendly personality, touching so many different individuals. Sholto Cole (1949G), who sadly passed away early this year, had this to say about his Bishops classmate;

“Soon, we all realized that here was an exceptional mind, and he was always top of the class. Lionel endeared himself to us with his sense of humour and hearty laugh. By the time we wrote the Matric exams, he was the only one to gain a First Class pass with 6 Distinctions… almost unheard of”.

Lionel felt strongly that his years at Bishops College were pivotal in his career development and provided great inspiration to him.  He loved revisiting the College and supporting the music department. He was delighted that his grandson Liam Hacking (Grade 6 2020), was able to attend Bishops. Lionel and good friend, Sholto in the Brooke Chapel. Newspaper clipping of the 1949 matric class. Lionel can be sitting listening intently in the front row with no blazer on. The caption in the newspaper read, "Mr H.J. Kidd, principal of the school, teaching Latin to a senior matric class. The boys are allowed to wear open-necks and khaki shorts at school and to take off their coats if they wish." 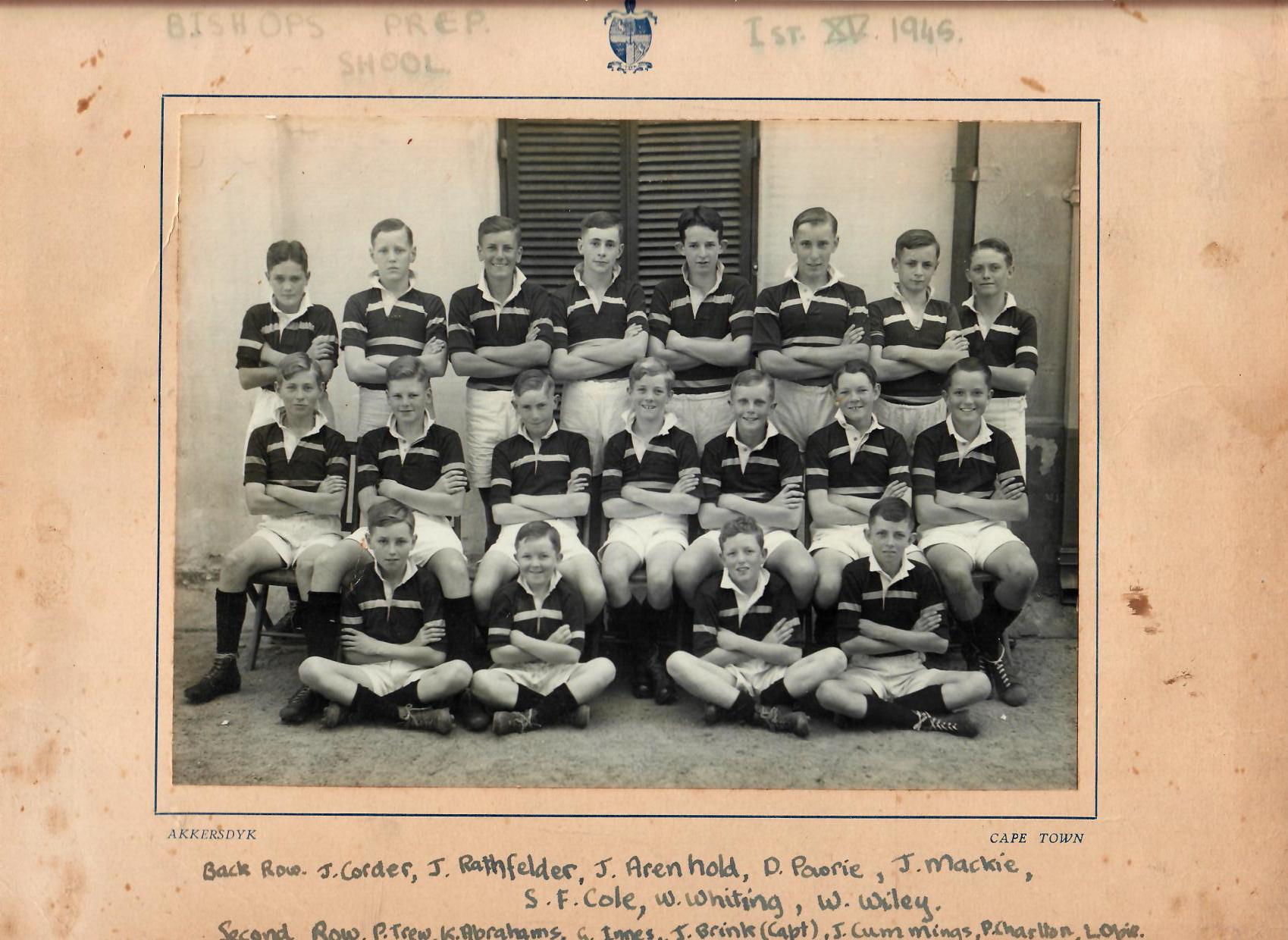 The u13 1st XI poses for their team photograph in 1945. Lionel can be seen on the far right seated on a chair.

The OD Union and the Bishops Community salute Lionel for his unrivalled contribution to medicine and the betterment of society.

Our thoughts are with Lionel’s wife Carol and two daughters Jessica and Amelia.