Ken Wilson knew every boy's full names and was courteously concerned for the welfare of boys and staff alike. His pace, perseverance and enlivening (even noisy) presence were unique to him ...

Ken Wilson, at the tug o' war event ...
School Archivist Dr Paul Murray reports: "Ken Wilson taught at Bishops from 1977- 1995.  His passing comes as a deep shock as he was always so full of life.  His abounding energy was infectious, and we as young members of staff learnt a great deal from him, as did the students under his loving care.  He always took a very real interest in young persons and staff, and gave them a strong foundation. This article carries a few photographs that I came upon in my album, when I heard today of Ken's sad passing.  Our condolences go to his daughter Zelda and family."
RIP Ken Wilson. Ken Wilson at the Athletics meetings - 1994 - his voice was always in the gravitas register, highly respected, in red, as the starter of the meetings. Ken as Master of ceremonies at one of annual tattoos that were held at Bishops in the 1990s. 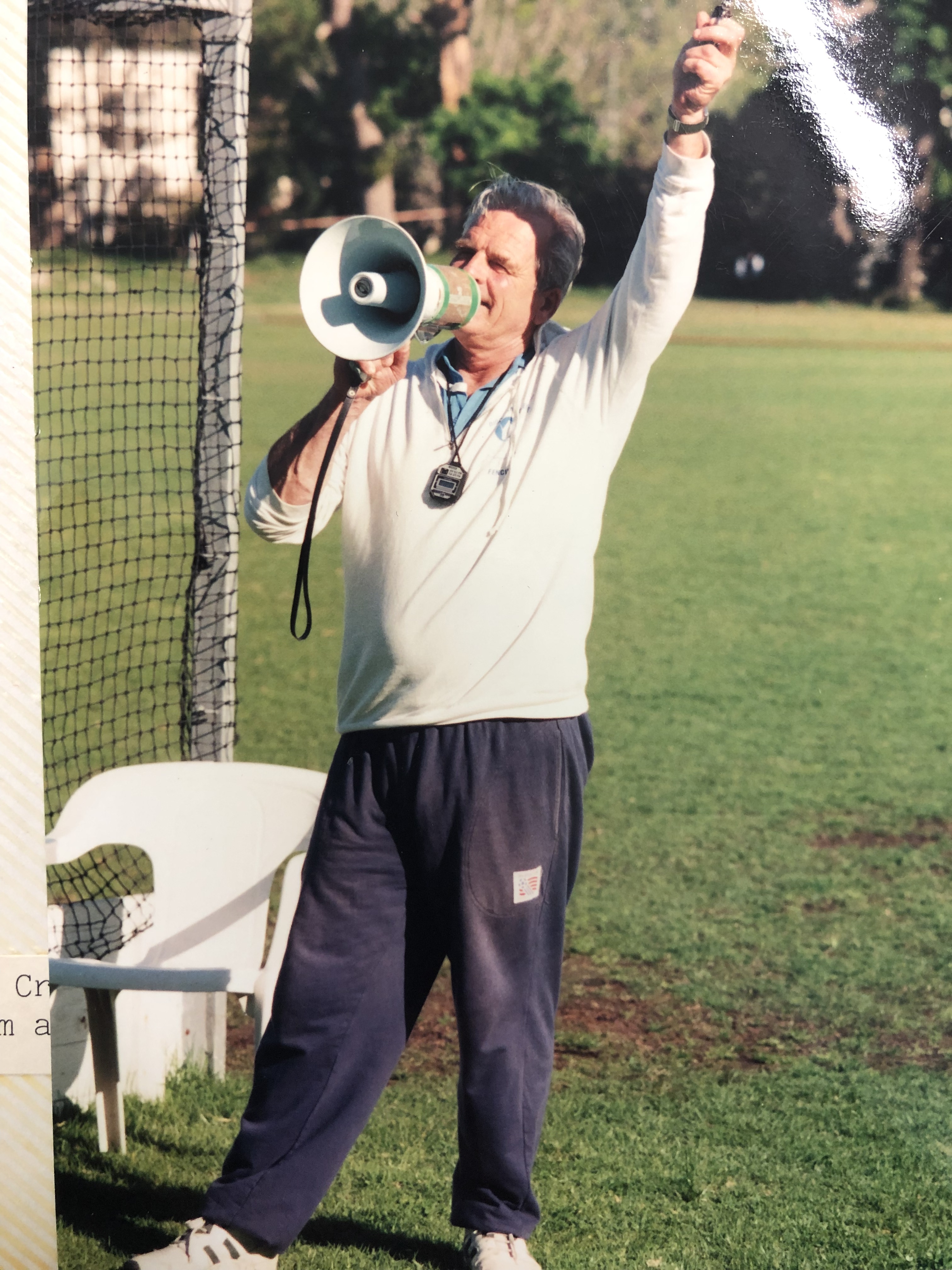 Ken at Heats Week, always fair and kind, engaging and interested in the well-being of each individual, knowing him by name and surname. 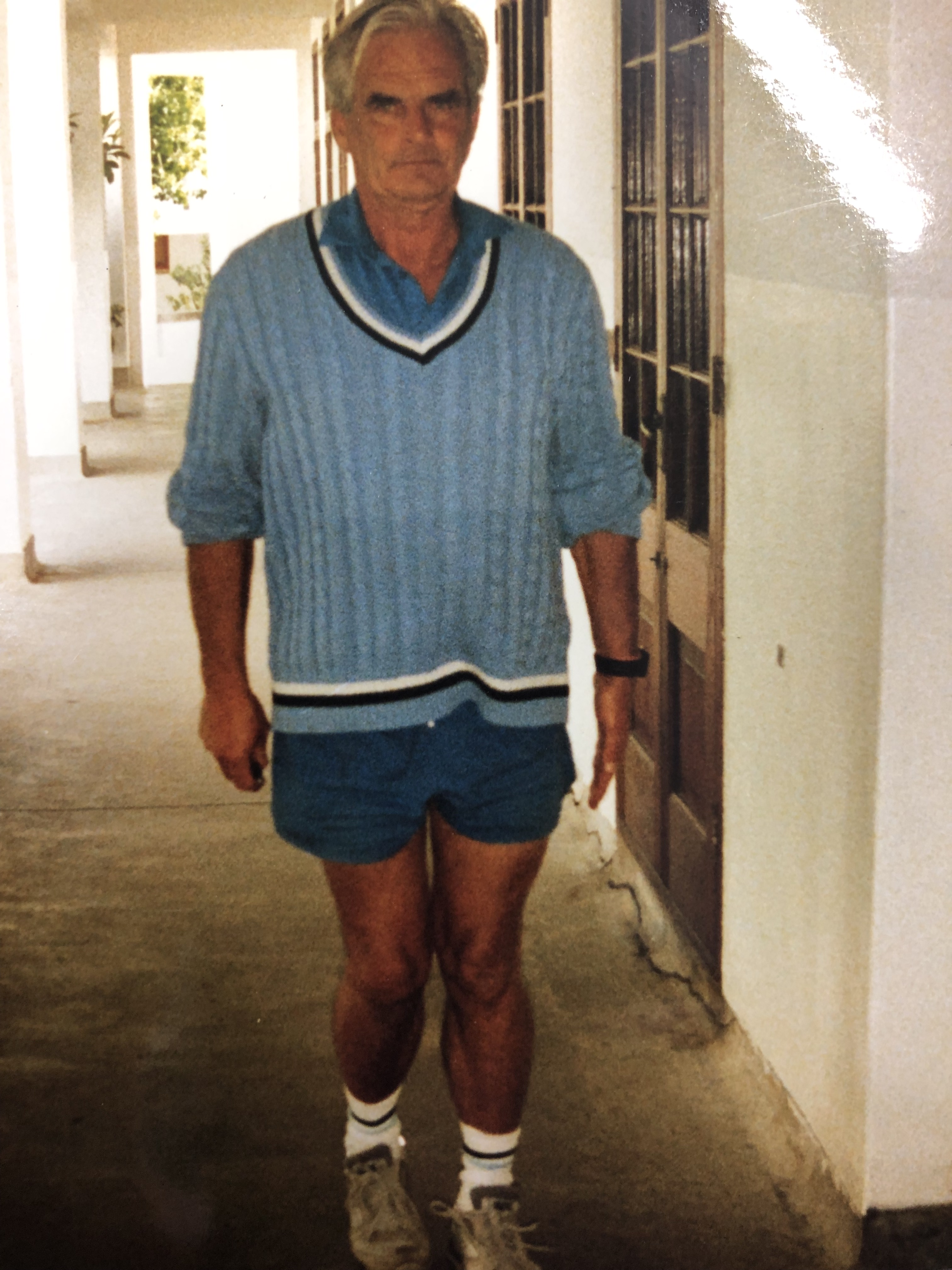 In between his PE Classes - gentle in spirit, resolute in deed.

The following is from the March 1996 Bishops Magazine by the CLive Watson (Principal at the time) at Prize-Giving, thanking and saying farewell to staff.
"Mr Ken Wilson is another special person retiring after a long and memorable career with us. Ken is also a man with good old-fashioned values. He spent years in the Royal Marines and in many respects never really left them. It took me some time to get used to a man several years my senior who clicked his heels and saluted at the most unexpected times. If Sir Walter Raleigh had not thrown down his coat, enabling a lady to cross a puddle of water, Ken certainly would have. With a model of propriety, straightforward honesty, and unchallenged virtue, Ken has served this school with the energy of ten troops, and mostly at the double!"
The following is an account from John Gardener's "Bishops 150".
"Ex Royal Marine Ken Wilson must have been the most energetic member of staff ever. He became PT instructor in the tradition of Hallas, Britton and Andy Robinson.  He called PT Physical education, a sign of his holistic approach to all he did.  He was a cadet officer, ran fencing, instituted basketball and the tug o' war, was involved in swimming, weight training and table tennis, staged the masterly annual tatoos, was in his red shirt, the athletics starter and was available for every conceivable ancillary sporting endeavour - at Prep and College.  He developed unparalleled lectures on subjects such as heraldry and the Olympics. He became assistant housemaster of Birt, and no tutor ever did more in the role than he did.  He knew every boy's full names and was courteously concerned for the welfare of boys and staff alike. His pace, perseverance and enlivening (even noisy) presence were unique to him, and for 19 years of Bishops boys he will remain one by whom to measure one's gentlemanliness and service to others". 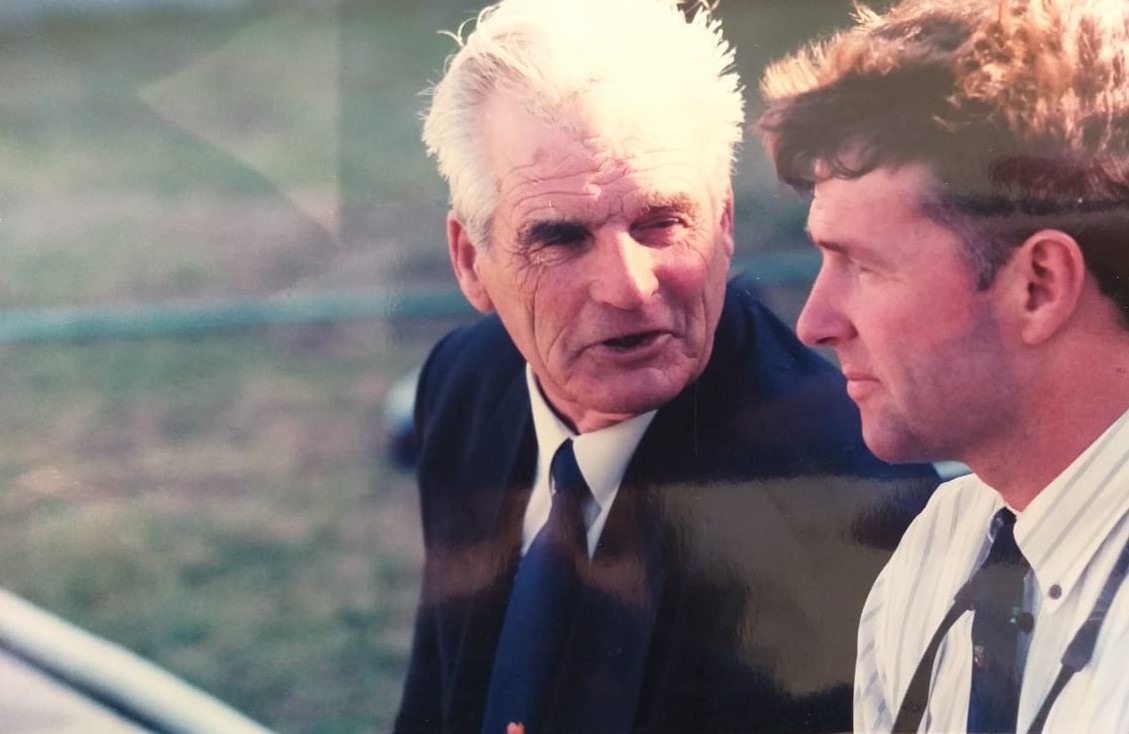 Ken announcing at the inter-school's cross country Circa 1986 - (Photo by BDK).


To read the full obituary of Ken, click HERE

Messages regarding Ken's passing have poured in, some of which included: