First visit to The Mitre, home of the ODU James Johnston (2012G) came to visit the Mitre for the first time.  We were surprised to hear that he had never been in the Mitre because the Mitre itself had not yet been built when he left school. 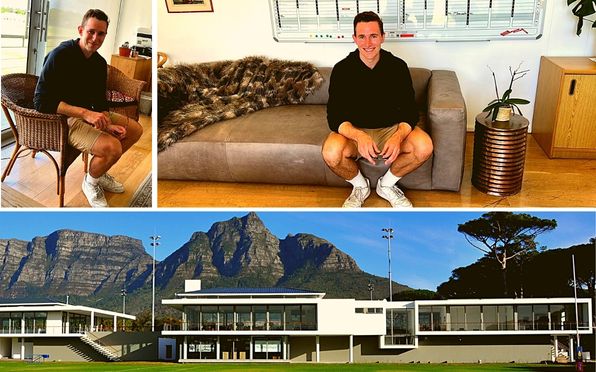 James currently lives in London and has not been back to South Africa since 2018 due to the pandemic. When he was at school he rowed for Bishops First.  This opened many doors for him and after school he was invited to row in the USA.  He was fortunate enough to go to the USA through a rowing scholarship at Harvard from 2013 to 2017.  After that he rowed for the GB national team full time for four years.

James could row for Britain because of his mom, Liz who originally came from Wiltshire in the UK.  James' dad, Paul Johnston (1972/3G) also went to Bishops as did his older brother, Robert (2010/11G) and younger brother, Piers (2015/6G).  Both his parents still live in Tokai where James grew up.

James retired from rowing during the pandemic and then got recruited by the bank.  He is now working in wealth management with banking firm, JP Morgan.

He was very impressed with the look and feel of the Mitre and enjoyed the mini tour of the building (lounge, museum, board room and offices) and even took some pictures of the lovely views of the school.  He is back in RSA visiting family who he hasn't seen since 2018.

We look forward to following his career.  Bishops, Harvard, London ... who knows what is next . We have many things in common. More...