Who was Robert Gray? Bishop Robert Gray is the official Founder of Bishops Diocesan College which opened its doors in 1849 at Bishopscourt, and the next year it moved to the current premises at Woodlands.  At the time of the school’s official opening, the Bishop was on an official visitation to the island of St Helena, which left it over to Mrs Gray to perform the honours of starting the school on that day in March 1849.

In addition, Bishop Gray and Mrs Sophia Gray started several other schools including Zonnebloem College, founded ten years after Bishops.  It was clearly a calling that brought the couple Sophia (Sophy) and Robert to South Africa.  Both came from gentrified families and could have followed other paths for their careers but they chose the route of dedicated service to the community they lived in.  It can be argued that Bishop Gray’s response was to the church, to spread the gospel in a far-away place such as Cape Town but it was also his burning desire to establish schools such as Bishops (1849), St George’s Grammar School (1848), St Cyprian’s School (1872), the Cathedral Grammar School in Makhanda (1849) and Zonnebloem College (1859).  In addition, he extended the Anglican Church in Southern Africa from 1848 when he arrived in South Africa, which today has a membership of approximately four million members.

Memorial tablets to Robert and Sophia Gray are to be found at St Saviour’s Church, Claremont where they are buried in the grounds.  On 02 September 2022, it will be the 150th year of the passing of Robert Gray when roses will be placed on the graves of His Grace and Mrs Sophia Gray.  In this way we remember their significant contributions to Bishops.

It is therefore fitting to make the Robert Gray Award in terms of its purpose:

“The Robert Gray Medal is the most prestigious and only award which the school can bestow on an OD who has made a significant and exceptional contribution in his field of endeavour, or to society in general.”

Here are the 2022 recipients of the Robert Gray Award, Hugh Corder (1971S) and Geoff Burton (1953G).   To read about them and their exceptional lives, please CLICK HERE. 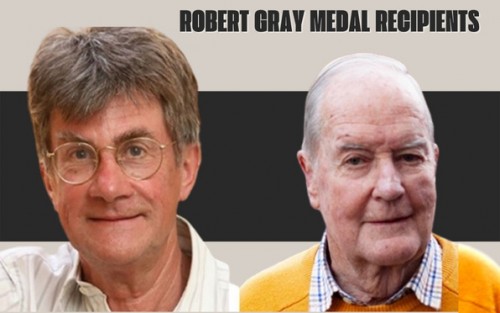 Nominations for 2023 are currently still open.  These close on 30 September.  Should you like to find out more about the nomination process CLICK HERE. The history behind the green jersey that is currently worn by South Africa's national rugby side More... The most crucial supply item in Operation Pedestal was fuel, carried by the SS Ohio tanker ... More...