We are terribly saddened to announce the passing of former OD Secretary, Tim Hamilton-Smith.

Mr Hamilton Smith was a towering figure in the Bishops community. He was loved, respected and admired. He loved Bishops and being a part of the Bishops. As the Founders housemaster, he welcomed boys to his care. At matriculation, he bade farewell to young men, equipped to face the world.
As a Geography teacher, he ensured that this Chairman received the only A in his school career. As a backhanded compliment, he was reported to have quipped that "if Pike can get an A, anyone can." The truth is more nuanced. Nobody but Mr Hamilton Smith was able to get an A out of Pike.
His work for the Union was valued and respected. The Union valued and respected him, and expressed its appreciation for his services by appointing him as a Vice President.
A star in the Bishops firmament has darkened. But light travels only so fast, and we shall bask in the last rays of Mr Hamilton Smith's life for many years to come.
Requiescat in pace.

The memorial service will be held on Thursday 4th October at 3pm in the Memorial Chapel with tea in the Heatlie thereafter.

Any ODs wishing to send condolences to the family can do so here: https://goo.gl/forms/SZlHorNWOCdDs9Xu1
An Obituary of Tim written by Paul Dobson:
A lifetime dedicated to Bishops

The Windsor Castle steamed into Cape Town on  27 December 1967, onboard two young people from Oxford, five months married – Tim Hamilton-Smith and his wife Carolyn, who had had her 21st birthday a day out from Southampton.
The ship docked and down on the wharf there was Vivienne Mallett who, after all the formalities were done, took them home to the principal’s house at Bishops, into an energetic family that included four children and some dogs.
Tim and Carolyn had come home. They had an immediate impact on the school, a wperful young schoolmaster with a beatuti9ful wife and Triumph Spitfire.

Bishops was much more to Tim than his 41 years of teaching at the school. It was more than his achievements – head of the geography department after Denis Hunt, housemaster of Founders for 12 years, vice-principal for five years till he retired in 2007, after which he became the creative OD Secretary for six years. It was home, the home of his being, the delight of his soul.
It made the wrench of leaving Bishops in 2013 all the more deeply painful. Four years later, in the chairmanship of Bruce Jack, Tim has made an honorary vice-president of the ODU.
He genuinely did not understand a comment such as: “I’m looking forward to the holidays.” Tim would say: “Why? Don’t you like your job?”
He cared for the place, spending hours on the woodwork in Founders and on the organ in the Brooke Chapel.
The saying goes that those who can, do; those who can’t, teach. Tim could do many things. He coached and played rugby, cricket, and badminton, played golf off a single handicap, played nimble squash and, not often known, played the trumpet. He started the Geographical Society and was the founder of the Bishops Society and its first director. At one stage he was shortlisted for the principalship of Bishops. Like Apollo, he was a man of many parts, a man of thought and a man of action, but with a relaxed way of going about things, seeming to do nothing, and, unlike Apollo, he had a great sense of humour. On the Windsor Castle, on Carolyn’s 21st birthday, Tim went to the purser and said: “Could you  do something for my wife’s  21st birthday – at the least possible expense?”
Tim joined in in staff activities. He was a particularly ugly villain in a staff play and went on tours to the Karoo and the Eastern Cape with the Stags, the staff cricket side. Inevitably he became a member of the Olympic Sports Cup where several Bishops masters were happily members and where the flags were dropped to half-mast in respect for Tim, an honorary life member. He was also graduate of the Silwood Cookery School and specialised in curries. Tim was very much a man’s man, happy in the company of men with its beery banter, and what better place than in the rugby environment. Just one look at Tim and you would immediately think “Prop”. He looked like a prop and was a prop. The boys called him, The Honourable Timothy Hamilton-Smith, the son of Lord Colwyn, “Tank”. That was his nickname throughout his time at Bishops. (Tim’s brother Anthony is the present Lord Colwyn.)
It was through rugby that Tim got to Bishops. After schooling at Cheltenham College, where he played rugby, Tim went up to Oxford. He played for Oxford but just missed out on a Blue (awarded only for the Varsity match with Cambridge). But there were South Africans there at the time who impressed him greatly – amongst them Errol Moorcroft, Elwyn Lloyd and Tommy Bedford.
Tim told Moorcroft that he was intending to go to South Africa and had heard such wonderful stories about Cape Town from his mother’s military brother that he wanted to go and teach there. Moorcroft told him that he should apply for Bishops, which Tim did with the devotion of a lifetime. Tim was born on 28 June 1944, which meant he was 23 when he arrived at Bishops, considerably younger than other members of staff. A new man in a new environment, he realised that rugby was a great way to get to know people and so he joined Varsity and played prop for them, before moving to False Bay where he and Basil Bey were the props and in 1972 when False Bayt won the Grand Challenge for the first time, Tim was a prop, Basil the coach.
From his first year at Bishops, Tim coached the Under-16 A, a really good and creative coach. Alan Douglas was then coaching the 1st XV and Basil joined the Bishops staff. Alan soon made the generous gesture of moving out of the 1st XV so that Basil could coach it, and later Tim became Basil’s assistant and they produced wonderful teams.
If you go to the Heatlie, you will see Basil and Tim commemorated next to each other there. It was Basil’s drive that built the first Heatlie, Tim’s drive that built the second, enlarged Heatlie. 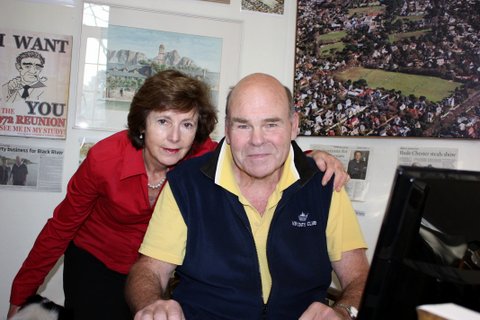 Tim Hamilton-Smith had had a five-year battle against cancer, a time of terrible, increasing suffering. He died peacefully in his own bed during the night of Monday-Tuesday, 24-25 September 2018, after a great life of activity and service. He is survived by his heroic wife Carolyn who was his primary carer and their two daughters, Annabel and Fiona and their families.
Not long before he died,  after Carolyn had left the room, Tim said: “I can’t believe that’s the little girl I married. She’s  so strong and looks after me  so well.”
Go well, good friend.